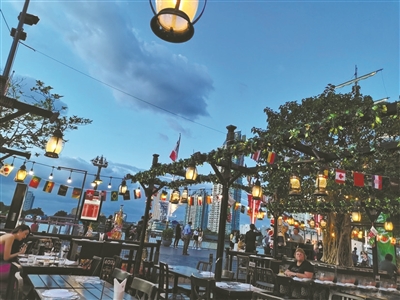 On December 2, a pep rally for Ningbo's "100 Trips, 1,000 Companies, and 10,000 People" Campaign kicked off in the city, looking to encourage local foreign trade companies to pursue business opportunities abroad through overseas exhibitions and business talks. The Campaign to propel the high-quality development of Ningbo's open economy will help local businesses build up confidence and get a head start by boosting export orders and market expansion.

In response to the Campaign, many local foreign trade businesses have ordered flights and made plans to attend international exhibitions in 2023. “The minute we arrived at the airport, we saw the bustling crowd. It looked basically the way it was before the pandemic. On the streets, there were few Chinese people, but visitors from Europe, America, and India were everywhere ...” This is what Erdem Ozturk, a young Turkish expat who has been taking up foreign trade business in Ningbo for nearly ten years, recently saw in Thailand. On December 6, the third day after Ningbo relaxed its COVID control measures, Erdem and his Italian colleague Giovanni Battista Belleri flew to Thailand with other business delegations from Ningbo to explore the market.

Erdem, executive of Ningbo Mascube Import & Export Group, is also among the first Ningbo Overseas Communication Officers. He helps not only the company with import and export transactions but also the city of Ningbo to present a valid image to the world. During his trip to Thailand, Erdem visited 4 businesses securing partnerships with two of them.

"One of the Thai companies we visited produces plastic injection molded parts to supply high-pressure cleaning equipment to Europe and America. To increase assembly line capacity, it needs to purchase parts from China before exporting products to Europe and America. We told the company that Beilun District in Ningbo is well-developed in industry and is marked as China's 'hometown of molds', and it is also a powerhouse of the national aluminum die-casting parts industry. As a result, they are pretty much impressed," said Erdem.

Moreover, Erdem visited another Thai manufacturer who intended to import steel parts from China. He was informed that some orders were indeed relocated to Thailand due to the 25% tariff on Chinese steel imposed by the United States. This suggests that importing steel parts from China is due to a discrepancy in industrial foundation between the two countries.

"We have been in contact for months, and now we have finally built a face-to-face friendship! They invited us to their annual party. We can source cost-effective parts directly from Ningbo with guaranteed quality and better prices. And the deal is set to take effect as early as March next year." Erdem said.

Currently, the streets of Thailand are gradually regaining popularity. More and more Chinese people are expected to fly there. During the trip, Erdem met a businessperson from Taizhou, a neighboring city of Ningbo, who also made moves without hesitation as soon as he learned about the policy adjustment. After listening to his story, Erdem spoke out of emotion: "In China's Zhejiang province, entrepreneurs will do everything they can to win orders. For them, nothing is impossible!"