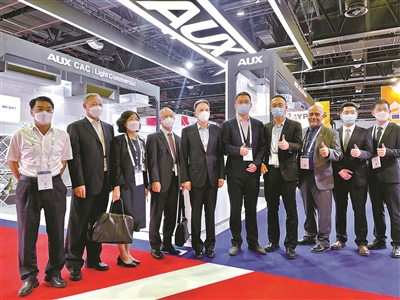 Members of delegation pose for a photo in the BIG 5 Dubai. [Photo by Shan Yuzifeng]

Recently, the first delegation under Ningbo's "100 Delegations, 1,000 Businesses" overseas market expansion and investment attraction initiative departed from Shanghai for the United Arab Emirates, Indonesia and Japan. The schedule of the ten-day journey is packed with trade shows and business association visits. How many orders will Ningbo enterprises bring back this time?

"Our schedule is very tight this time." Chen Yuan, general manager of Ningbo Kangda Electronics, said that, in addition to attending trade shows and visiting clients, he is also going on a road show attended by potential clients, organized by the local business association, hoping to score multiple orders. "Our company used to focus on the European and American markets, but this year American orders fell by forty to fifty percent, which is why it is so important for me to reach out to new countries."

"Ningbo's importers and exporters are eager to go abroad to explore new markets," said Li Feng, a member of the delegation. He pointed out that for many companies, this is their first time travelling abroad after three years of the pandemic. He expressed his gratitude to the Ningbo Municipal Government for facilitating visa applications. Many businesspeople want to take advantage of the opportunity afforded by the initiative to sign on more clients. "Dubai and Jeddah are close, which is why some Ningbo business representatives plan to attend trade shows in both cities. Some of them have arrived in advance to visit local clients and put up booths."

There are 37 Ningbo exhibitors occupying 66 booths at the Saudi Arabia China Commodity Intelligence Exhibition. The 13^th China (UAE) Trade Fair, to be held from December 19 to 21, will have 161 Ningbo exhibitors and 123 booths, more than any other Chinese citys.

"We have attendances from more than 150 countries expected to be visiting the BIG 5 this year. It's still very early, but the past three days have been super busy. The BIG 5 covers eight different product sectors. On top of that, we have also six specialized events, so we cover everything from building materials, furniture, water technology to the windows and doors of buildings, to the tools... the visitors that attend the BIG 5 come from all around the world," said Josine Heijmans, an organizer of the BIG 5 exhibition. She kindly welcomed the big representation from China.

The worst of the local pandemic was from April to June 2020, when the Dubai World Trade Center booth was converted into an 800-bed square-cabin hospital and all exhibitions were suspended. Things have improved since then, and economic activities have fully resumed. 2 months ago, Dubai completely lifted its mask mandate.

"Manufacturing and foreign trade are Ningbo's strong points. Ningbo businesspeople have a very strong desire to go abroad and expand new markets. Recently, there are many exhibitions and market opportunities in Europe, the US, West Asia and Southeast Asia, so I hope this trip will help bring in more orders," said Zhang Shuiqing, deputy director of the Economic and Information Technology Bureau in Ningbo.

Dubai Port has world's first fully automated container yard, where containers can be stacked in layers of eleven. Compared with the traditional yard, the handling volume and speed are much higher, but the cost is also correspondingly higher.

Ningbo's goal is to organize representatives from a thousand companies in a hundred delegations to travel overseas before April next year. This move would help the companies expand their global horizons while making Ningbo more attractive to foreign investment.

As of the end of November, Ningbo has mapped out a total of 263 such delegations. Among them, 167 delegations will attend trade fairs in 23 countries including the United States, Germany, and Japan. They are expected to participate in a hundred well-known international exhibitions, such as the 8^th Saudi Arabia China Brand Commodity Smart Manufacturing Exhibition and the 13^th China (UAE) Trade Fair. 84 delegations will travel to Asia, Europe, the US and beyond to visit clients.